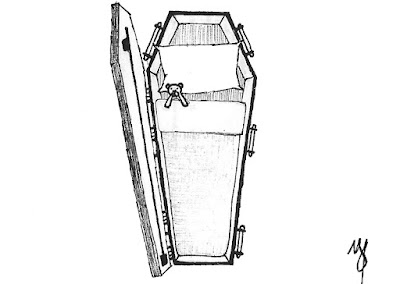 There has long been an association between sleep, and death. First of all, obviously, there's that oft-repeated sentiment, found on some gravestones, in eulogies and obituaries and in memorials: "Requiescat In Pace", which is often translated to, and literally means - Rest in Peace; associating death with resting. There's a popular quote from 17th Century poet Thomas Traherne - “Sleep is cousin-german unto death: Sleep and death differ, no more, than a carcass And a skeleton.” [Author's Note: cousin-german means "first cousins"], which speaks for itself. Also, there's the 1947 poem "Do Not Go Gentle into that Goodnight" by Dylan Thomas, the titular line of which refers to dying as 'that goodnight', a phrase often used to farewell someone going to sleep.
When someone is deeply sleeping, they're often referred to as "dead to the world" - in fact, in my family, when a baby is sleeping in a pram, we might refer to them as a "dead kid" (this is commonplace, right? We're not weird, you're weird...).
There's also a  somewhat popular Tumblr meme, which refers to sleep as "death without the commitment", and various other puns on sleep and death, like "sleep is a free trial of death".
It kind of makes sense. After all, both usually involve lying down, moving less and not taking part in society.
But this free association between the two, in my opinion, leads us down a disturbing path, because of the existence of dreams...

For, when we are asleep, we often dream - we live a sort of pseudo-life, which can be beautiful and fantastical and allow us to achieve things we always wished to in life; or, we occasionally experience nightmarish scenarios of being chased and tormented. This may lead one to assume that similarly, when we die, we also "dream" in a sense - living a sort of after-like, which can be beautiful, or tormentous.

I'm not religious, I'm aspiritual and I'm a skeptic, so I don't really believe in the afterlife - it is my opinion that when you die, you are dead, and any notion that some part of you "survives death" is not only inherently paradoxical, but nonsensical.
However, because I'm an agnostic, I am willing to say that there may possibly be some post-life experience. I don't think that makes scientific sense, but until we fully understand the mechanism of life, death, consciousness and mind, there does remain the distinct possibility that my assumptions about dying are wrong.

However, unless and until we understand all those mechanisms, jumping right in the deep-end and saying "yeah, we die, and it's just like when we dream" is not only stupid and wrong, it's also deeply disturbing.

For one, you might think that I'm jumping the gun by saying that people assume that after-life is like dreaming, but honestly, the Judeo-Christian concepts of Heaven and Hell sound a lot like "living the dream" and "suffering through an eternal nightmare". And to me, it explains the dichotomy between how some people interpret death. Some theists believe that after death, we experience nothing (like a dreamless sleep), some believe that everyone, no matter what, will go to a peaceful afterlife (like a dreamful sleep), whereas some believe that if you're bad, you'll either be annihilated, or experience something horrible (having a nightmare). It also explains how there are so many wild and various explanations for how these "spiritual places" look, since to each dreamer, their dream will be differently surreal.
Yes, there's more specifics in mythologies, but both of them include personified dream manifestations (in the form of angels or devils) and both seem to be magical, breaking many known laws of physics, which makes sense if they're built upon dream logic.

But, this is my fundamental issue of believing that death is like sleep, and the afterlife is like dreams. Because if heaven is dreamlike, then there isn't a heaven, there's just two hells. One where you're not in control, being tormented by nightmares, and another where you're in control, and either everything you do is meaningless because the world can change at the speed of thought, or it's an eternity trapped in a surreal landscape which, inevitably, you will tire of.
If you ask me, that would make Hell the lesser of two hells, since at least in Hell there's hope that you can fight to change things, you can at least run away when being chased. In Heaven, all problems go away, and there's nothing to strive towards - life would be hopeless, pointless and meaningless. And I figured all that shit out when I was ten years old.
So, all told, whilst I don't know what the "post-death" experience will be like, the idea of being dead is actually more comforting than some ideas people have about living in an afterlife fantasy. And if you think that dying is like going to sleep, I implore you... WAKE UP.


I'm the Absurd Word Nerd, and this is the end of my Halloween Countdown for 2021. I'm trapped inside since I'm only half-vaccinated (at time of writing), and whilst I did a trick-or-treat thing last year, and it was kind of fun, I won't be this year because we're still dealing with coronavirus - and I implore that you do the same tomorrow. Most vaccines haven't been approved for children, meaning that kids are running around unvaccinated, and taking part in an event where you have to travel all around town, going to people's houses, and being handed stuff to put in your mouth is just asking for trouble.
So, unless you want your kids to get sick, and spread a deadly virus, please stay home and stay safe; enjoy Halloween with some holiday horror movies, and until next time... sleep tight.

Written by Matthew A.J. Anderson at 12:30 am No comments:

Matthew A.J. Anderson
Mister Anderson sat by the fire with his favourite pair of fizzy slippers, which - thanks to a tragic typo by the author - were frothing all over the rug.